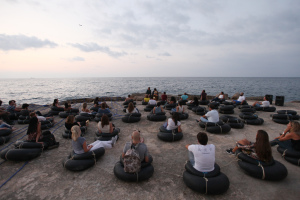 BEIRUT: For some theater lovers, an evening’s entertainment entails a comfortable separation between audience and performer. Those needing this sort of splendid isolation might be a bit bewildered by “A Ticket to Atlantis,” which has briefly revived Ain al-Mreisseh’s historic ladies beach. Ultimately, the sustained, dreamlike lyricism the players accomplish during this multi-media performance more than compensates for the slight inconvenience of theatrical immersion.
“Atlantis” has been devised by Lina Issa and Mayar Alexan, a pair of Syrian- and Dutch-trained performers, with Argentine composer-multi-instrumentalist Santiago Cordoba, who accompanies each performance live.
Its makers cast the show as an exploration of the relationship between the human body and the sea. Taking its departure from the experiences of migrants who have fled disaster by sea, the piece proposes a link between the human desire for safe haven and the legend of the drowned city of Atlantis, while alleviating the burden of identity.
“Atlantis” isn’t theater driven by dialogue and plot but a modular composition bereft of both. What semblance of narrative it does have is expressed during a sequence of metronomic monologues in the midst of the performance.
This “act” of the play is sandwiched between two other pre-recorded monologues in which Cordoba’s music and Issa and Alexan’s, sometimes ritually inflected, movement are central features.
The performance space is the former Ajram ladies beach – a concrete ledge extending for a dozen or so metres from the Ain al-Mreisseh seafront, where an ensemble of squat historic structures shields the proceedings from the Corniche’s traffic.
Audience members are never allowed to feel separate. As they descend toward the water, individuals encounter Issa – who encourages each to perform a brief (non-religious) ritual act before taking a seat.
Apparatus are distributed for individuals to listen to a recorded monologue in standard Arabic (English-language typescripts are available). The conceit of the play’s first, highly poetic mode is that the sea is sentient, with a memory of the human beings that have physically interacted with her.
The narrator depicts a woman who comes to swim daily, a ritual she performs to grieve the loss of her husband, who himself drowned at sea. Though the language makes the monologue less universally accessible than other facets of the play, there is a lovely sensitivity in how the physicality of the woman’s movement through the sea – and how she and the sea mingle – is depicted.
For those leery of the childish tropes of Disney-style personification, Issa and Alexan’s characterisation of this body of water is intriguingly adult – at once curious about the humans that move atop her and impervious to the sentimentality humans feel when other members of the species drown, sometimes en masse.
“ … Everything fell silent,” the sea notes, after depicting the violent flurry of a mass drowning. “Maybe we got tired. Maybe we got to know each other.”
Having heard the sea’s perspective, the performance begins in earnest, with a panicked-looking Alexan appearing on the balcony of the structure behind the, by now standing, audience. He darts back and forth in this enclosed space and eventually escapes whatever invisible danger is pursuing him by dropping to the audience’s level.
Confronting the whitewashed wall that impedes his moving forward, a strip of white fabric – resembling an unusually resilient flake of peeling paint – wraps about him like a mummy’s bandages. The audience is encouraged to follow him as he moves down the wall.
This choreography blends into an encounter between Alexan and Issa, whose movement suggests the sea’s embrace of a drowning man.
With dusk falling, assistants bear ranks of inflated inner tubes to the performance’s next station.
Each row is comprised of perhaps seven pairs of tubes, each set of rings lashed together and bound to the ensemble.
The audience are encouraged to use the tubes as seating, staring seaward as Issa and Alexan – now draped in blankets like freshly landed refugees, their faces lit by a lone lamp – take turns recounting the (colloquial Arabic) monologues of migrants who have survived a life-raft Mediterranean crossing.
As darkness descends around a crescent moon, several distinct modes of solo and duet choreography unfold, with different props employed – a fish tank, lit depictions of jellyfish. Ultimately, cast and audience move back to where the play commenced, where several individuals are invited to join the players in examining the venue from a different perspective.
The artists have good reason to assert the aesthetic autonomy of their work from the news – specifically the on-going refugee crisis, in which the Mediterranean has been as much a player as the smugglers and the migrants themselves.
In the Ajram performance that this writer attended, some of these goals have been attained more successfully than others.
Any connection between the performance and the mythic-historic city of Atlantis may have inspired some choreography but otherwise goes undeveloped beyond the title itself.
It seems likely too that, for many in this audience, the work is as moving as it is precisely because it successfully evokes the experiences of refugees undergoing the sea voyage to Europe – especially the module built around inner tubes and Levantine Arabic testimonials.
That said, the theme of flight by sea is pervasive enough to give “Atlantis” a life well beyond this tragic and shameful moment in the region’s history.
The show’s language and stage design draw upon sources far more broad than the news. When it does dip into the visual and narrative tropes of the present crisis, it does so with imaginative verve.
“A Ticket to Atlantis” is performed daily through Sept. 10 at the former Ajram Women’s Beach, Ain al-Mreisseh, facing the Palm Beach Hotel, starting around 6:15 p.m.